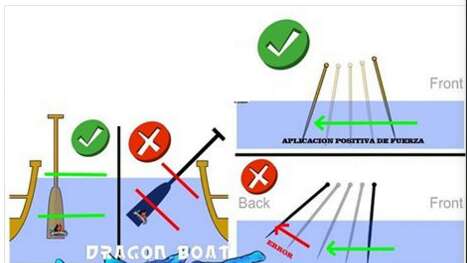 In the last years as a coach I have been lucky to attend to many international championships and I was able to observe many teams from different continents, and analysing every one of the teams I wonder. Which is the right Dragonboat technique? Does a unique technique really exist? I summarise below which would be the right technique from the point of view of my own experience and the most important thing: from the science point of view. YES, you have read well, from the science, because the most efficient technique was not invented by a gentleman who decided to try to paddle in diverse ways until he found the most convenient one for him and said “Ok this one! I have the perfect technique”, and unfortunately this is the problem of many coaches. Because, how could we define the perfect technique? I would personally define the sport technique as the group of movements and gestures that we must perform in a sport. A right technique will imply that such movements and gestures will be performed the most efficient and effective way possible.
Analysing different Asian teams and comparing them to the European ones that I train or advise as well as studying the European and American TOP teams all of them have something in common in the AQUATIC PHASE which can be more or less short, but the angle of the paddle in relation to the water is IDENTICAL as well as the angle of the exit of the paddle. Why would it be? Well, this has a very easy explanation! The transfer of the forces applied to the water, the dragon paddle is flat, it hasn’t any angle that got to address the applied force in one or another direction, is way simpler.
If we can make the paddle stay during the whole aquatic phase perpendicular to the water and when the recovery initiates we make it be in a 90º - 80º angle, we will be performing a correct transfer of forces applied to the water, without wasting our applied energy. Why? Basically, because if we get a totally perpendicular stroke there will only be a force vector just in the opposite direction to the one the boat is going, the transfer will be 100% positive. On the contrary if the stroke is not totally perpendicular there will be two vectors of applied forces, one force vector to the sides and another in the opposite direction of the boat, dividing the force in two vectors and losing transfer and therefore efficiency in the stroke (it usually happens in paddlers who come from KAYAK or coaches who practise or have practised KAYAK and have a flawed technique (just like it happens in the profile picture chosen on purpose for this post)
I attach video of the forces applied to a fluid with a dragon boat stroke.